It’s insanely nerve-racking having to go through the excruciating pain of losing a dog. After all, man’s best friend is a part of the family. Time passes swiftly and the void inside seems to remain empty no matter what you do.

Longing for another moment to experience with your loyal, beloved companion always leaves a dark cloud of horridness looming over one’s head for quite some time. Luckily, this was not the case for an incredibly fateful incident that occurred in Norman, Oklahoma. The events that transpired will leave you shocked and uplifted.

The story began when a lost dog wandered into a local Walmart. The black, white-spotted dog was wearing a muzzle and looked like it had spent a very long and lonely time traversing around. Then suddenly when a post by a Walmart assistant manager was made on the Norman Community Page, a series of serendipitous events started to unfold.

The post read, “I’m lost! I need my parents,” and “I wandered into Walmart on Classen Blvd. Come get me!”.

Things began spicing up when coincidentally a woman named Deb Melser, who had investigated if the dog had a microchip, made a comment on the same post.

“I can’t believe I was part of something pretty amazing tonight, posted Melser. “So a dog walks into a Walmart through the cart section-LOL-sounds like the beginning of a joke, right?” True story, though.”

“I volunteer to scan him for a microchip. Drive over to Walmart, where a very kind woman, the assistant manager of the store, has him in her office.” Said Melser.

“Lo and behold, he Has a chip!! Call the chip company and got owner info. The first number was incorrect. The second number worked, and this lady’s mom said, she doesn’t think her daughter has that dog anymore.”

“Sandy the nice manager, said she would be willing to take him home and house him temporarily until his owner was connected.”

A Sudden Twist Of Fate

Then this happened: In miraculous fashion, the registered owner of the chip was traced back to Kimberly who reported that she had lost a pup 6 years ago! After an incredible amount of search and desperation, Kimberly had thought her pup was lost forever. She never would’ve dreamed that she would be contacted to meet up with her once thought to be lost doggy.

The moment was finally here. Kimberly was overcome with emotion as she was able to hold her furry companion in a heartwarming embrace and smother him with endearing kisses. The reunion was captivated by this incredible picture.

Truly a unique moment for these two. Kimberly would’ve never thought in 6 years she would have the chance to rekindle her relationship with her beloved pooch. The pure joy expressed in Kimberly’s face is worth more than 1000 words. It’s enough to bring anyone to tears.

The incredible effort made by Deb Melser and the Walmart staff should be applauded as the nomadic dog is finally able to return home to his rightful place alongside his owner. Even though it took a resounding amount of time for this inspiring reunion to occur, let’s not forget that hope will always remain vigilant

Another, arguably more important reminder, is that days we spent with our loved ones, whether animal or human, should constantly be cherished. 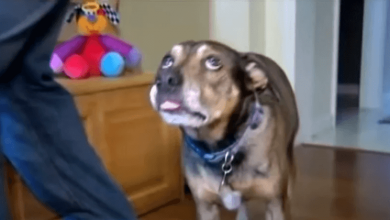